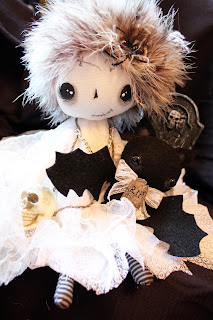 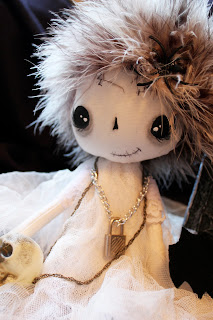 Georgia was a peculiar child, with some very interesting quirks.
Taking a fancy to the strangest things, she always wore a constant smirk.
Dolls and teddy bears were not her thing, in fact she really didn’t like toys.
Graveyards, scary stories, bats, and skeletons were in truth her absolute joys.
Because of her oddities and fascinations, Georgia was seen as an outsider.
You see, it was not acceptable to spend your days in a graveyard playing with spiders.
While she never wanted to change, she often felt awfully alone,
In fact, she desperately longed for a friend to call her very own.
But this was not going to happen because whenever somebody came near,
The moment Georgia stood up to say hello the person left screaming so loud the whole town could hear.
To help pass her time little Georgia loved reading ghost stories in her favorite cemetery.
To her, ghosts in sheets and clanky chains were not even scary.
Finally though, she wondered why she was so weird…
Why did she love the things so dear, that everybody else feared?
And then one fateful day, while strolling the graveyard that seemed so desolate and bleak,
She peeked down at her reflection in a pond and gave a gruesome shriek!
For so long she wanted to see a specter that maybe she could befriend,
But what she didn’t realize was SHE was a ghost that had already met her end!
Georgia was a ghost and she didn’t even realize it-
SHE was the one haunting the cemetery and she was the one that everyone despises!
Once she came upon this amazing innovation,
She was relieved and filled with new sensations.
Georgia could stir up mischief with her “wooo’s” and clanking chains,
However she still had an emptiness that was causing her great pain.
She needed a friend, somebody to help her haunt the grounds.
She realized a lifetime of pranks and laughter is pointless and suddenly frowned.
Just as she thought her afterlife was doomed,
Down swooped a bat also in need of a friend she presumed.
And so it was settled, Georgia was incredibly content,
With her best friend Dimitri, her eternal life would be well spent. 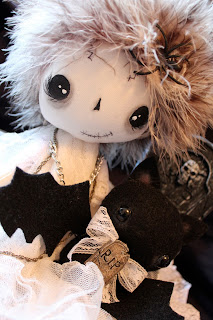 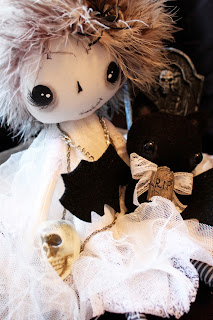 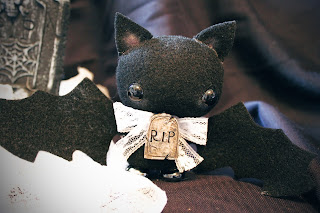 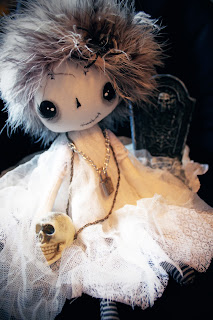 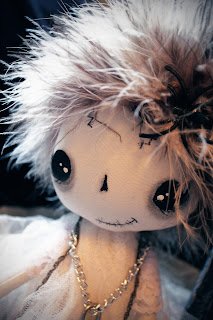 This was made for my friend, Paulette. If you are familiar with craftster, you know her as Craftewoman. She makes INCREDIBLE stuff. I mean, AWESOME. She asked to do a swap with me for Halloween because she was inspired to make a Victorian ghost girl doll and knew I would love one.

Of course I jumped at the chance to swap with her again. The funny thing is, her doll she made me inspired me to to start sewing this style of doll, which is now going to her. Full circle, eh? :)