First of all, I had an AWESOME day. My mom and I were in need of a small getaway. She just started work again (at an Elementary School) and was stressed over getting everything in order, and I have MAJOR cabin fever. We went to Boise and kicked off our day at Art in the Park. There were several things I really enjoyed but number one was an artist I met who I share so many similarities with not only in our interests, but our styles are way similar as well. He is much more skilled though I think, but he is awesome. He is Justin Hillgrove, and you should definitely check him out! Just to give you a hint of why I liked him so much, there were some of his most common themes: Alice in Wonderland, Yetis, skeletons, cthulhu, zombies, Harry Potter and monster. Need I say more? This is the thing that caught my attention and literally ran across the park to see it!

After that, we went to the mall where I picked up some more sweatshirts to applique and decorate for my trip to Disneyland, and then we went thrifting! I LOVE thrift store shopping! I made a hual of Halloween stuff! It was so much fun getting such awesome decorations and craft stuff for SO CHEAP. 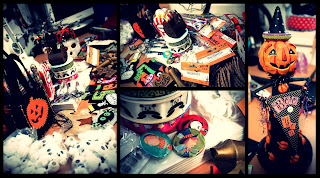 Lastly, today I made it to over 400 fans on Facebook! I plan to do a giveaway in honor of this during October. I may up the ante if I can get some more blogger followers. So start spreading the word! ;)

We dont celebrate Halloween, its to frustratinggg

That spread of Halloween stuff looks like sooooo much fun!!!