Little Lilly
This here child was once dear sweet Little Lilly-
She was ever so cute, always acting silly.
But unfortunately playing games and making jokes,
Eventually only lead to what made her croak.
While sitting down for their afternoon tea,
Little Lilly and her mother were visited by a bee.
Instead of using etiquette and keeping a proper stance,
Little Lilly jumped up and started to dance.
Flailing around wildly and throwing cucumber sandwiches,
She caught her dress and ripped out her stitches.
Her skirt now unraveling and a bee fluttering madly,
Little Lily started getting stung and her dress was torn badly.
Finally just when she had lost the bee,
And just as she thought she was finally free,
She went to run back but her dress was so torn up,
Little Lilly tripped on a tear and drowned in her tea cup. 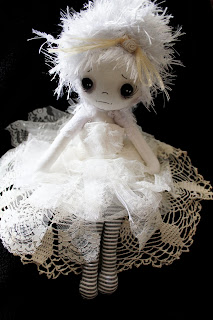 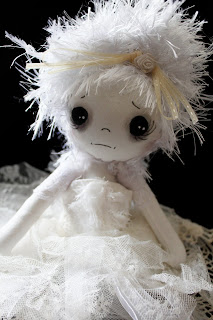 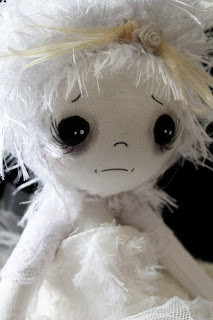 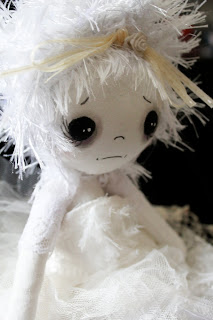 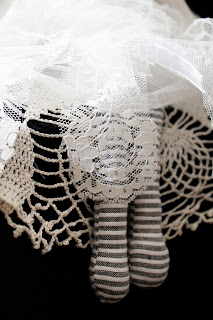 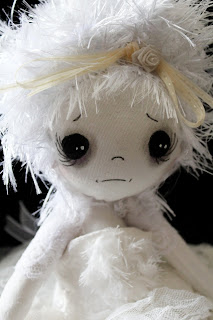 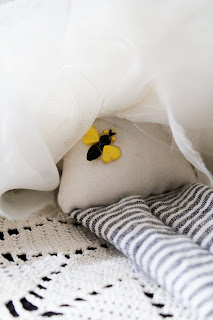 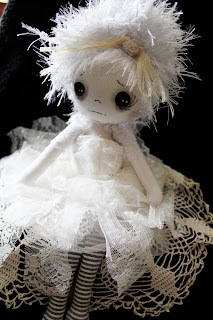 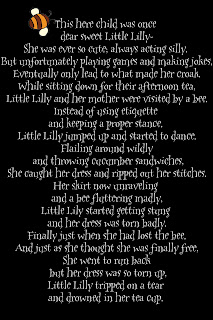 This is my first real doll. I started her at midnight and finished her at 8:00 this morning (with a few pizza and Doctor Who breaks). She has some flaws and mistakes but I am so incredibly proud of her. I never thought I would be capable of making something like this and for my first ever attempt at a doll, I think she is pretty good! Plus, I drafted the pattern myself and actually drew it out and saved it! (I normally just cut out pieces and just sew until it works) Not to mention the fact that I made her on a sewing machine I had never used ever before and I figured it all out by myself!
Her actual design and was inspired by the dolls of Craftewoman and Lesley Jane dolls- the technique and Victorian Ghost Idea that is. Plus the fact that I have ALWAYS LOVED reading Victorian ghost stories in the summer. And then her style and poem was inspired by my love for Tim Burton and Edward Gorey. I plan to make an entire series of these dolls now, one for each letter of the alphabet!
I know I have so much more to learn and a long ways to go, but like I said, I am darn proud I accomplished this on my first try. :)

i adore. i just love these style of dolls. what did you use for her hair?

Thank you! I bought this weird furry ribbon by the yard. Me thinks I am going to have to go get more! :D

She is so wonderful. I love her little face.

She's gorgeous! I love that feeling when you look at something you have created for the firdt time and you just think 'Holy crap, I totally made that! I am so awesome! How am I not running the world!'

She is simply adorable :)

She is absolutely gorgeous. I can't believe this is your first. Amazing.

I love the doll. She is very creepy and haunting. Your paintings are cool. They're fun and funky. Beautiful work.