Hey everybody! I have been bogged down all week with a sinus infection. Because of that, I have not completed anything new. :(
However, I was feeling a bit better today, so we did a photoshoot with my cousin's baby. She will be a year old at the end of this month, so we did some birthday pics. I have a bunch on my photography blog,  and facebook fan page and I would LOVE, LOVE, LOVE it if you checked them out and followed me! 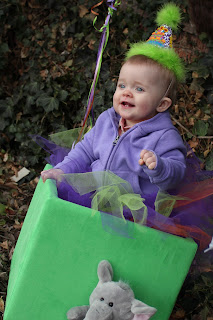 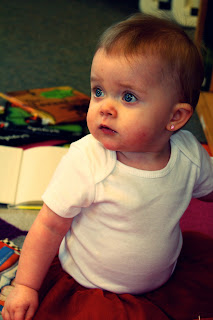 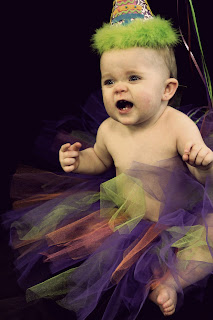 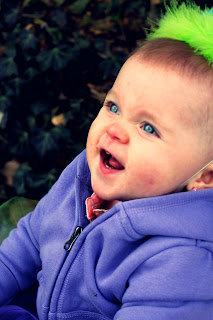 Unfortunately, I overdid it today and now I am feeling worse. But it was totally worth it for these cute pics!

Posted by Alexz at 9:53 PM 1 comments Links to this post

So I only got one Nessie done this week, and that is it for the progress this time. I decided to take a little break and relax. Mothman can get brought to life later this week. :)
However, I am not disappointed with my lack of creations because I am so in love with Big Nessie. It turned out great...still a few flaws, but much less, and I know what to do now on the next one and I should have it pretty perfected. :) 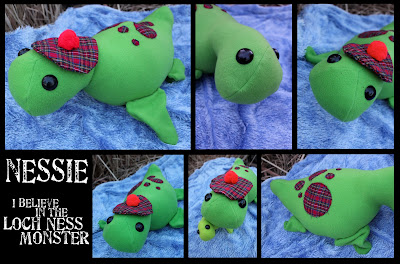 This one will stay and live with me to use as a sample of my work for when I go places, but I plan to sell these as made-to-order on my Etsy. And I have to make one more for a very lovely woman and lover of all things Nessie. Jessica, you shall have your Nessie sooooon!
I love her little Tam Hat. I feel like Nessie would wear one of those. She is Scottish, afterall. 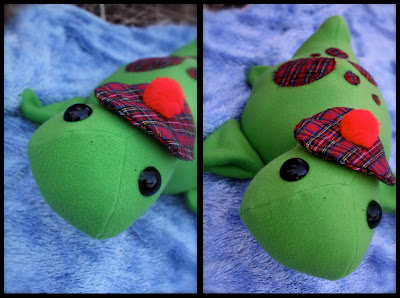 She is quite large! She is over 21 inches across! The body is about 9 inches wide, fin to fin it is a little over 15 inches. 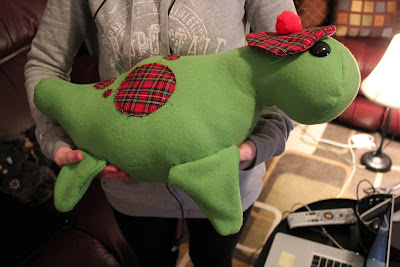 For a size comparison, here is the smaller one which is about 10.5 inches long. Her body is 4 inches and fin to fin she is a little over 9 inches. It looks smaller in the picture than it actually is. 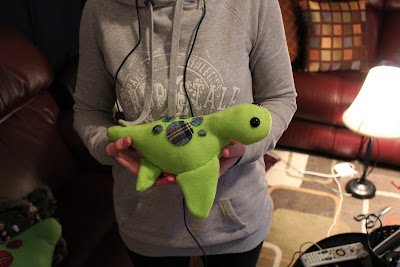 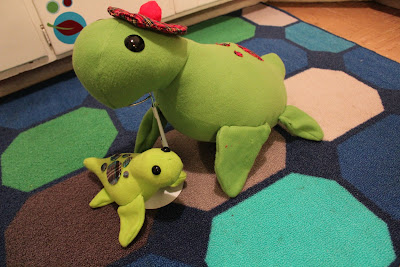 Posted by Alexz at 9:37 PM 4 comments Links to this post

Oh Nessie, Come On! Loch Ness is Where You Belong!

Away up in Scotland is the place that's best
Is a Scottish fjord that they call Loch Ness
The loch is so deep there ain't nobody know
And deep within the loch is a bonnie bonnie creature
A long time ago there was a people who knew
The water and the land and all life is sacred.
Everybody treated Nessie with respect
Nobody bothered her swimming in the sea so,
Swim round so proud and beautiful.
Now the people of the world look down in Loch Ness
And they noticed something big and bumpy swimming all around
And the newspapers said, "she couldn't be found"
So they got the radiomen and the television crew
Run Nessie run they're all after you
Now they've got the helicopters and submarines too
If you let them capture you I know what they'll do
We'll have to pay to see you in an underwater zoo, No!
Go now, get down, and swim away
But don't you forget to return on a sunny day
Come on, come on, oh Nessie come on
Come on, come on, Loch Ness is where you belong
So come on, oh Nessie come on, Loch Ness is where you belong. 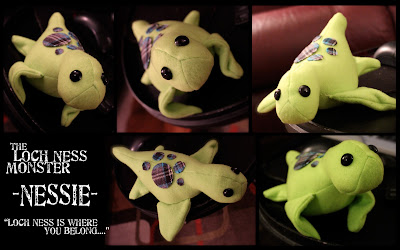 Okay, I was going to wait to show this project when I had the finalized version done, but I am just too excited to wait. I showed it to Amy, my official product tester, and she gave me her two thumbs up so I thought I would show this one since the finalized version will be slightly different anyway.
I am telling you, I have never had such a hard time on a project (at least sewing) than I did with this plush monster. When I first started sewing not so very long ago, my first project was my yeti. I was able to just eyeball the pieces and shapes and cut them out without ever making a pattern and that has continued to be my way all along.
So when I set out to make a Nessie, I knew I was in for a challenge. Which is why it took me this long to get around to making one anyway, because I was intimidated. I finally sat down to do it and let me tell you- it was no easy feat. My first initial ideas and designs were FAR different than this. It was unlike any Nessie I had seen, and I loved it, but it just would not work out in the end. (I may try that idea later, still!)
After many failed attempts, and yelling and cursing, I finally realized I could not get away with just guessing a pattern and cutting blindly. I was going to have to actually draft a pattern. So after much cutting and hard work, I made a 3D paper pattern using tape and glue, and low and behold it worked! This is the first time I have ever drafted a pattern for something and I am soooooo proud!
This one has some flaws, but I think overall he is adorable, and now I know what to do and what not to do for the next one. The rest will be a slightly darker green, but still bright! I am going to be doing the spots in red plaid and actually sew them one (they are glued on this one) and I will be adding a Tam Hat to match the spots.  Finally, there will be three different sizes I think...a miniature one at 5-6 inches, a medium one (this one at about 8-9 inches) and a HUGE one that I am hoping will be 14-16 inches or so.
I hope to have both a few different ones done this weekend  to show off in different sizes with their Tam Hats and red spots and cleaner execution. Stay tuned! Happy Friday ya'll!

Posted by Alexz at 12:37 AM 3 comments Links to this post