Meat Loaf and Alexz, Together at Last

Hi there! I am still waiting on packages to be received to post anything but I have some things to share. Yeasterday was Part Deux of my birthday. Kevin had to work on the actual day, so yesterday he took my to the Boise zoo and then downtown to the Record Exchange (my favorite store ever) and to the mall, bookstore, and dinner. It was seriously a blast! We have not been out in so long because of work and a lack of money so it was a real treat. It was also finally nice and we had some real summer weather instead of rain. Kevin bought me a Jackalope trinket, Munee doll to paint, and a dress. He knows me too well! But I also had something amazing happen....
So, many of you know this already, but
I am obsessed with Meat Loaf.
The singer, not the food, of course. I have loved him since I can remember (literally), and when I say obsessed, I mean it. This is a deep-seeded, long-going love affair with the man and his music! He is my hero in every way possible and has inspired me in every facet of my life. 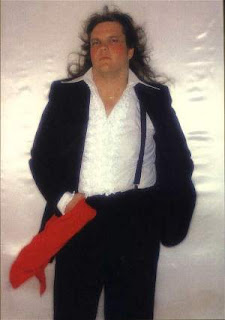 He was scheduled to come to Boise my senior year of High School but the concert was canceled the day before due to health issues. I literally cried for a week straight and never truly let go of it.
Well, not too long ago he announced his Hang Cool Teddy Bear Tour a couple months ago and I have been watching it fanatically everyday since then. I was losing hope that he was not coming anywhere near me as every place so far was on the East Coast of the states or in Canada. But on my birthday, a miracle happened. He added Snoqulamie ,Washington to his roster which is only 6 and half hours away.
I have two seats in the front row, center for Meat Loaf.
Yes. I get to see my hero in concert after waiting what seems like my whole 24 years of existence. This is the happiest moment of my life. I am going to see MEAT LOAF!!!

WOO HOO! I'm so excited for you! Take a ton of pictures and have the best time of your life!

It's always Meatloaf time! Have fun!

That's so awesome! Are there still tickets to that show? I'm from Washington, and I'd love to see that show!