The Yeti that Started it All. 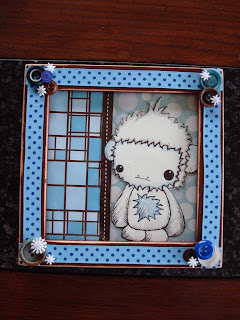 This is Waddell. Waddell was drawn in August 2009 out of boredom, but he won my heart instantly upon completion, and spawned an obssession that not one person could have predicted.
lol...I drew this yeti and made an entire little collection of cryptid characters which were framed in a giant collage pieced frame for our county fair art show. I only made a it few hours before the deadline, but somehow it won first place. It had a ton of characters, but I just fell in love with this one. Since the show, I have taken apart the whole thing, and used the character in other pieces, or decorated my studio with them, saving them for something special. But I had this one set aside, so the other day, I decided he needed to be framed since he literally started my obession with yetis. He now sits on a shelf surrounded by a myriad of other yetis which you shall see shortly!
P.S.-
Waddell is named for Laurence Waddell:
"An early record of reported footprints appeared in 1889 in Laurence Waddell's Among the Himalayas. Waddell reported his guide's description of a large apelike creature that left the prints, which Waddell thought were made by a bear. Waddell heard stories of bipedal, apelike creatures but wrote that of the many witnesses he questioned, none "could ever give ... an authentic case. On the most superficial investigation it always resolved into something that somebody had heard of."

he's adorable! luv his name too!

I love your little yeti! I also love Nessie!