I noticed something funny today. I am going to a wedding with my friend Lisa tonight, my friend, Kayla's wedding to be exact. Lisa, Kayla and I met in kindergarten and we were best friend's throughout grade school and remained close throughout life. To be honest, it used to always weird me out when my friends started getting married right after high school. But now, the weird part is not that a good part of my friends are married or have children...the weird part is that we are all old enough and at that age to be doing so! Am I the only one who has ever felt this way?? I just can't believe how fast time is going by. I thought I would feel so grown up when I reached my 20s but I really don't. At any rate, I am really pleased with where my life is going and I what I am accomplishing. I have high hopes for my future and big plans to make things happen. I can't believe I am done with college already (for now anyways) and that I am moving on to new stages of life. It is exhilarating, scary, confusing... but all the same, it is simply great! I have a lot to be grateful for and I can really go in whatever direction I want. So look out world! Here I come! Anyways...I don't have anything new yet, since I have just been relaxing over the break. I should have some new stuff to show off though, by next week. I start work on Monday, and I will be starting some new projects and finishing some old ones to give the new year a fresh start. In honor of the snow we have been getting (which is now melting today) I guess I will show off some of the snowmen I made for gifts and swaps. 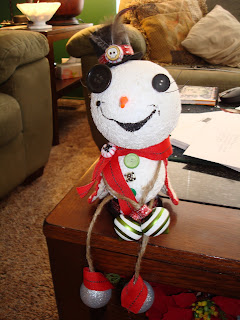 This one is a bigger one that went to Pam, (kittykill) as a little Christmas gift! I have made some other ones similar to him for gifts, but I forgot to take pictures before giving them away. D'oh! I like this one the most though, because he has little skulls...he is my little alternative Christmas snowman! Pam is such a cool gal and I really look up to her, so I wanted to make a traditional Christmas decoration but still fitting to her awesome personality. 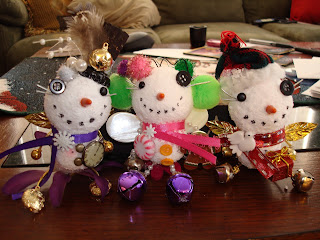 These three are much smaller and have hooks so they can be hung up on the Christmas tree. Made for an ornament swap, each one is crafted to their recipients personality. The first one was sent to a girl who loves the color purple and steampunk themes. The second one was sent to a gal who wanted bright colors for her tree with a candy/baking theme. And finally the third one went to Paulette, (craftewoman) who just liked traditional themes. So I guess each one is a mix of their owner and me!:) 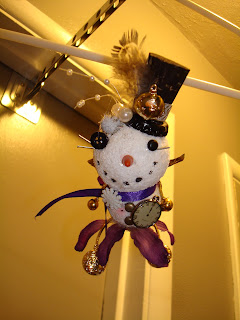 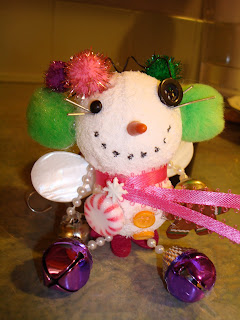 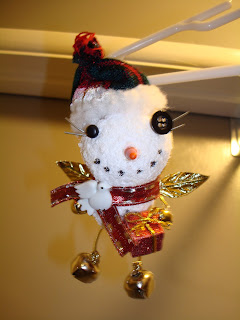 Paulette has also been somewhat of a mentor or big sister to me and I also look up to her a lot, so I sent her a little extra set of magnets with this snowman design. :) 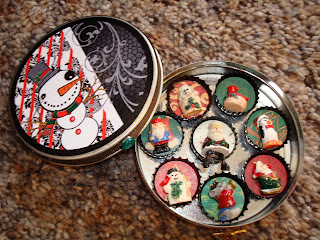 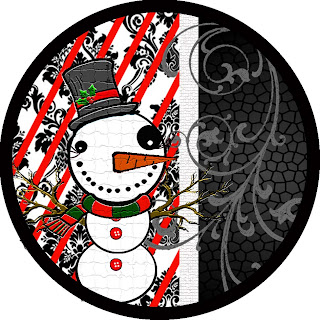 Maybe my snowman post will bring some more snow this week! (Although, I will be stuck in the house since I can't drive for crap in it.)

so cute! you are very talented!